Taking Pangolin off the Menu 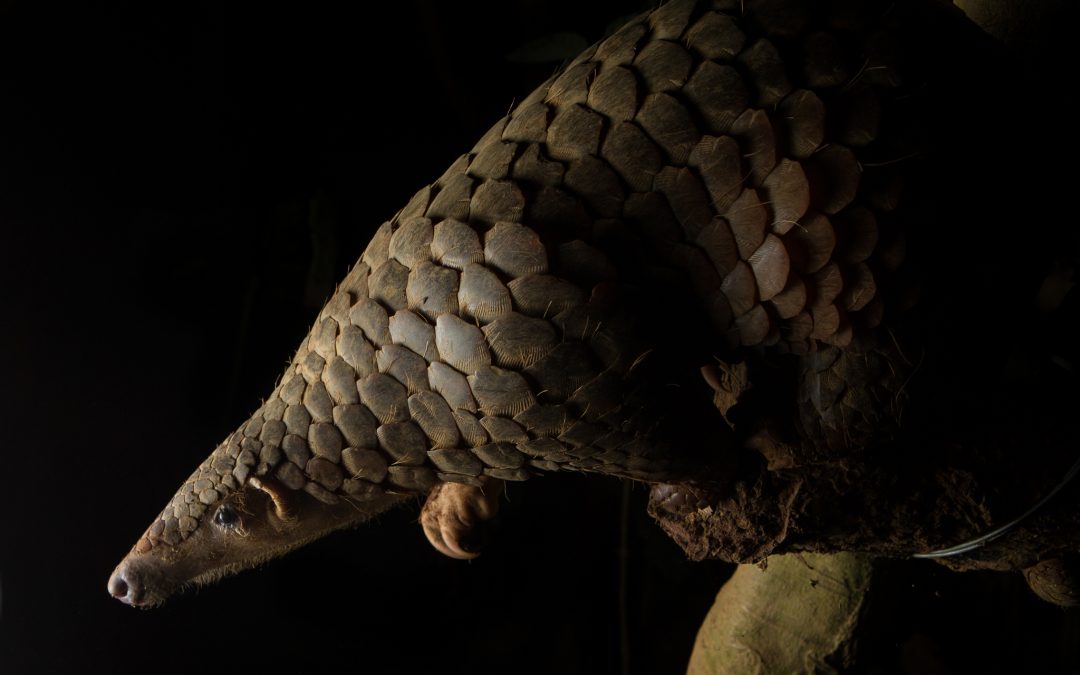 Taking Pangolin off the Menu

Without the tireless efforts of local conservation heroes, one of the most heavily trafficked animals on the planet might just go extinct—before you even know it exists.

When acclaimed conservation photographer Suzi Eszterhas settled in for the evening, she didn’t know what to expect. She seldom does when trying to photograph elusive, nocturnal creatures. But circumstances on this particular night were unusual. She was sitting in an enclosure—albeit a naturalistic one—and although she knew her photographic subjects couldn’t flee, she thought it was quite possible she might spend the entire night being riddled by biting ants without capturing a single shot. 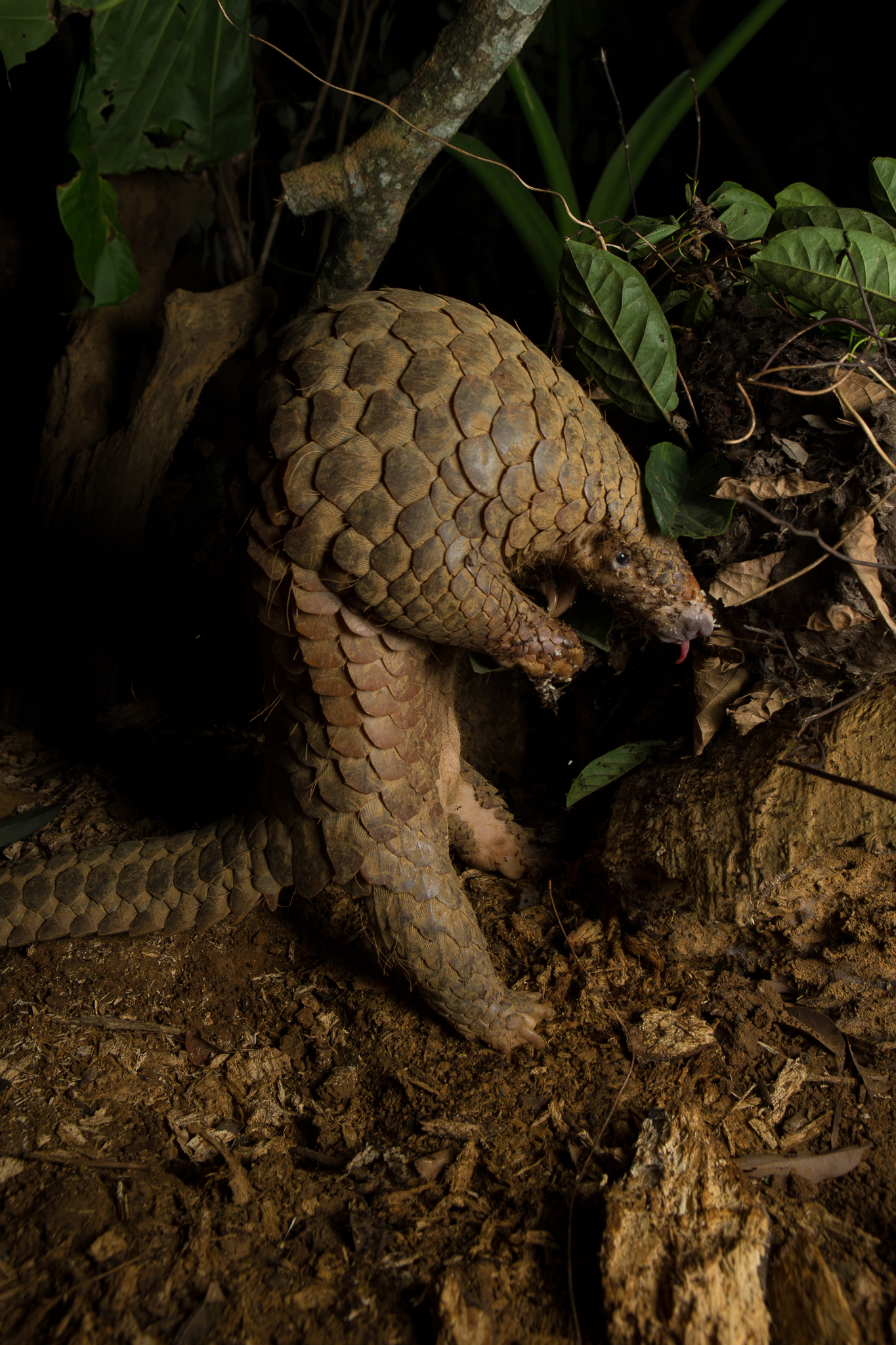 A couple hours later, a bizarre creature—a Sunda pangolin nicknamed “Lucky” by the staff of the rehabilitation center where Eszterhas sat—sniffed his way out of his burrow and lumbered into the photographer’s frame. Eszterhas has photographed a lot of spectacular creatures and has made a name for herself capturing rare imagery of newborn animals in the wild, but this, the first pangolin she’d ever seen, made a lasting impression.

“Some animals you can’t help thinking just seem too innocent for this world,” she said. “The pangolin is one of those creatures.”

This young Chinese pangolin was the product of a captive breeding program at the Taipei Zoo. Programs like this are helping to supplement the numbers and genetic diversity of pangolins that have been lost in the wild.

Innocent, but otherworldly, too. Resembling some sort of stubborn holdout from Earth’s prehistory or a sci-fi writer’s composite creature possessing both reptilian and mammalian traits, the pangolin is one of the strangest animals most people have never seen. It is also the most illegally traded wild mammal on the planet, according to the International Union for Conservation of Nature (IUCN), and is in danger of being eaten to extinction. 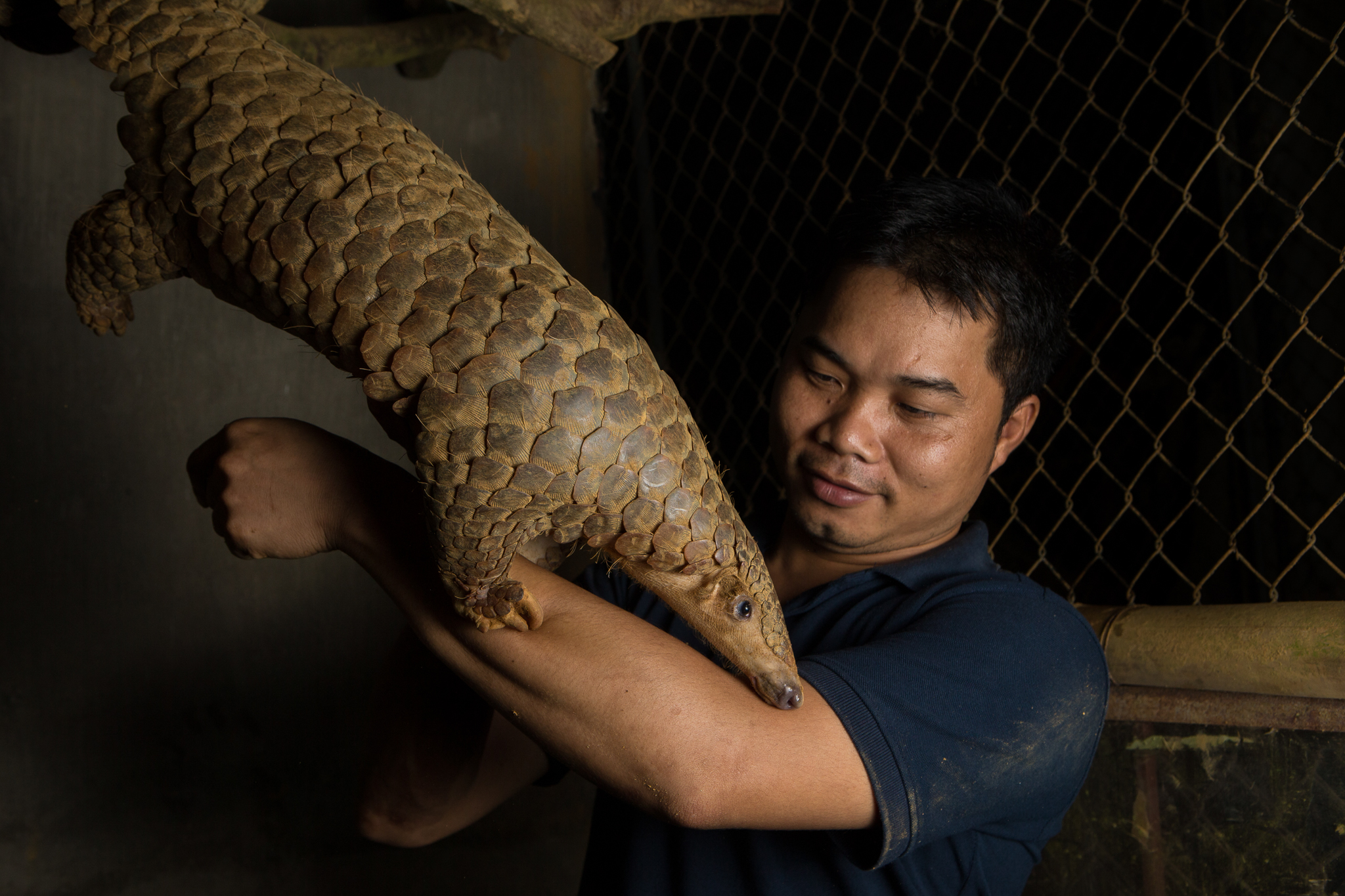 Nguyen Van Thai knows well the innocence, mystique, and vulnerability of the pangolin. Nguyen established this rehabilitation center, called Save Vietnam’s Wildlife, in 2006 to protect some of his native country’s most vulnerable creatures. Lucky and four other pangolins, all confiscated from traffickers, were some of the center’s first residents. But Nguyen’s obsession with these creatures dates back much further than that. He often tells a story from when he was just eight years old of watching in horror as a hunter pulled a female pangolin and its baby from their burrow. He’s been determined to fight for these exploited and underrepresented creatures ever since. 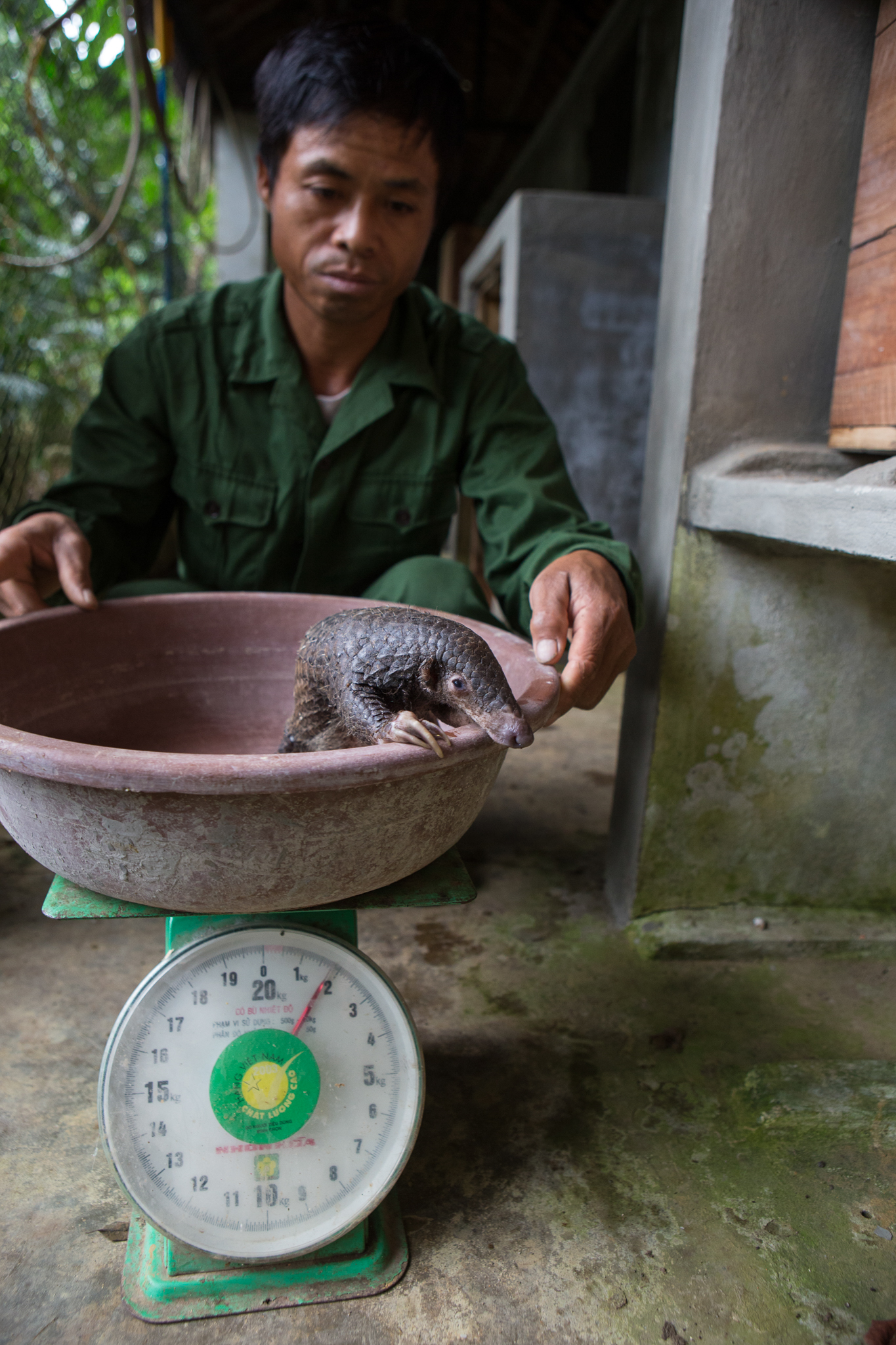 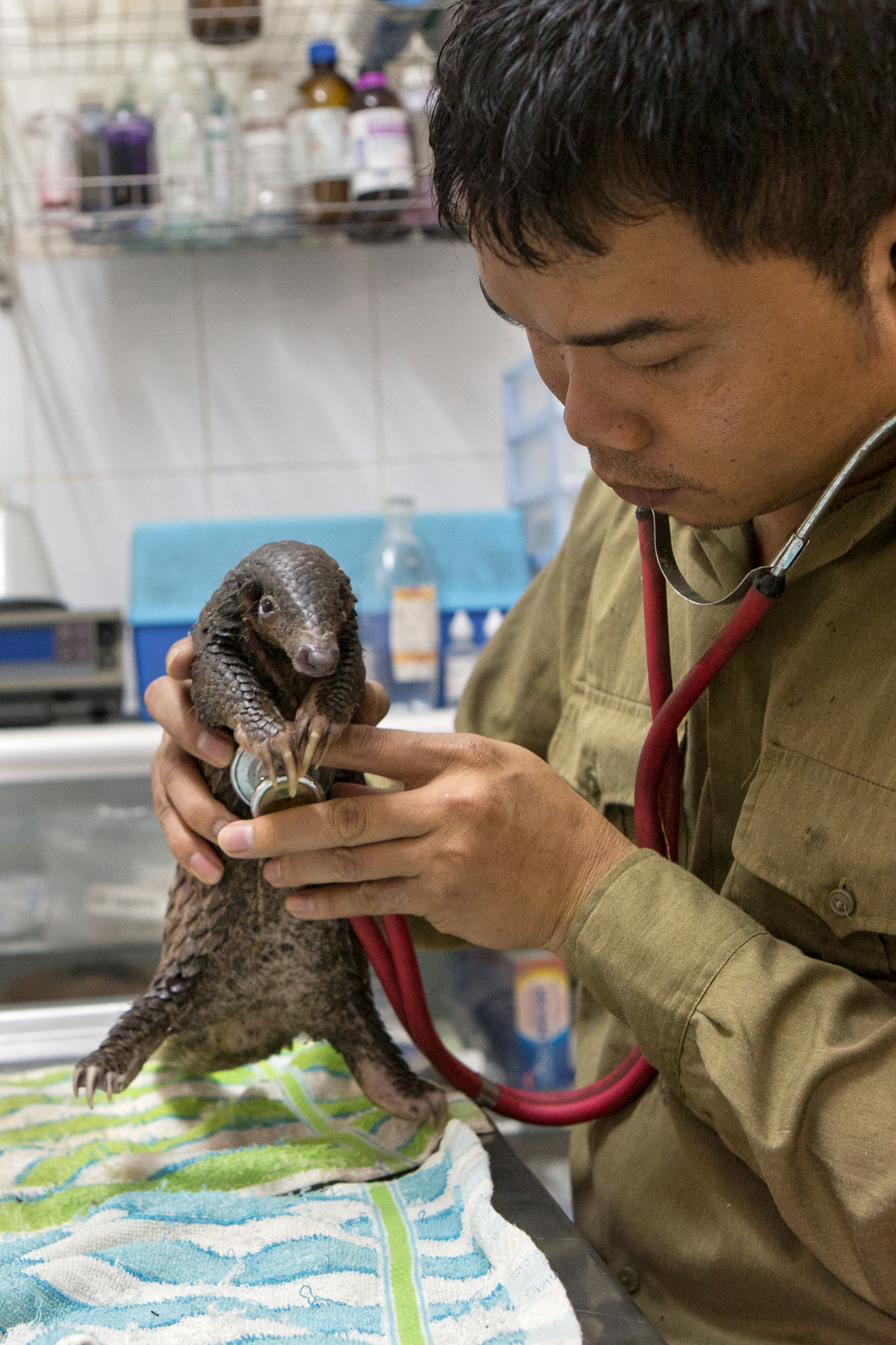 The world currently has eight living species of pangolin, four in Asia and four in sub-Saharan Africa. These eight—the only members of the family Manidae, which is the only family in the order Pholidota—occupy their own little branch of the tree of life. Although the pangolin’s scales are the most prominent symbol of that uniqueness—no other mammal has them—the eight species all share several other physical and behavioral characteristics. For example, none of them has teeth. All feed almost exclusively on ants and termites, which they access by tearing into the insects’ nests with their powerful forelimbs and heavy claws, and then collect with swipes of sticky tongues that stretch nearly the entire length of the animal’s body when fully extended. 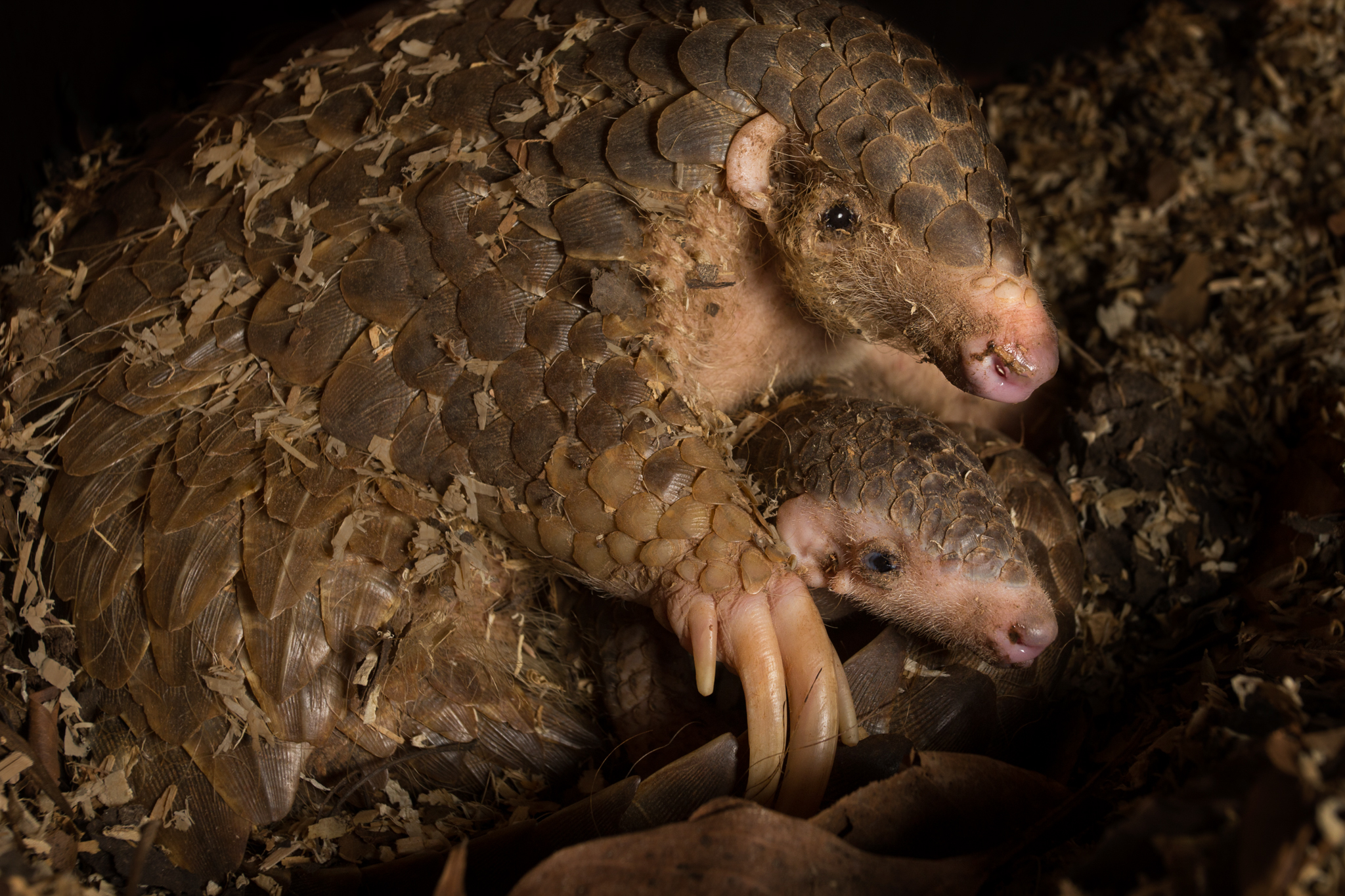 When threatened, pangolins tend to retreat into burrows or curl up into a ball, leaving only their scaled surfaces exposed. Unfortunately, what has proven to be an effective defensive strategy for some 80 million years since pangolins first evolved has made these animals particularly vulnerable to human hunters. Snares set at burrow entrances and dogs that can sniff out and dig out hidden pangolins are the most commonly used methods. And if hunters are lucky enough to stumble upon a startled pangolin in the open, they can simply pick up the coiled animal, shove it into a sack, and continue on their way. 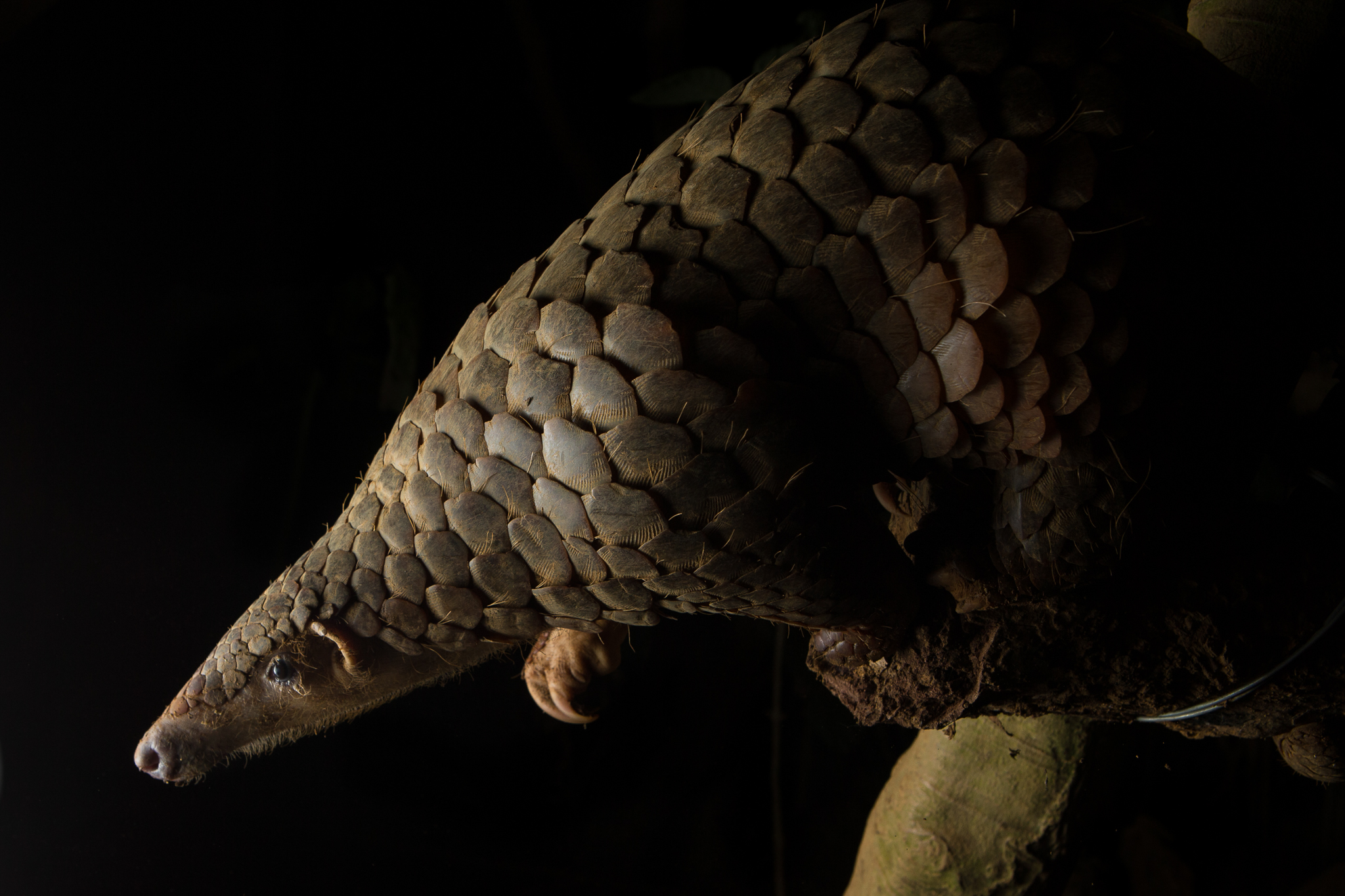 It’s a lucrative business with devastating consequences. Pangolins are prized both for their meat (and blood), which is considered a delicacy, and for their scales, which are used in traditional medicines—despite the fact that pangolin scales are made of keratin, the same substance as human fingernails. A single live pangolin can fetch several hundred dollars on the not-so-hidden Asian black market. And these prices have only risen in recent years, fueled by official bans on the legal trade of pangolins and their parts, as well as a lack of concerted efforts to enforce those restrictions. Nguyen and IUCN reports suggest that you needn’t look far to find pangolin meat being offered on restaurant menus and their scales being sold as remedies for everything from ulcers to acne, particularly in China and Vietnam.

While no one knows how many wild pangolins have fallen into this illicit market, the IUCN estimates that the number is likely more than a million over the past decade. While all pangolin species are under threat, two Asian species, the Sunda pangolin (Manis javanica) and the Chinese pangolin (Manis pentadactyla) have been hardest hit. Although both species are adapted to a wide variety of habitats and their native ranges cover vast swaths of geography, the IUCN estimates that their populations have declined by 80 percent or more over the past several decades, and the organization predicts a similar rate of decline over the next 20 years, unless swift action is taken. At this moment, both species are listed as critically endangered, just one precarious step from extinction. 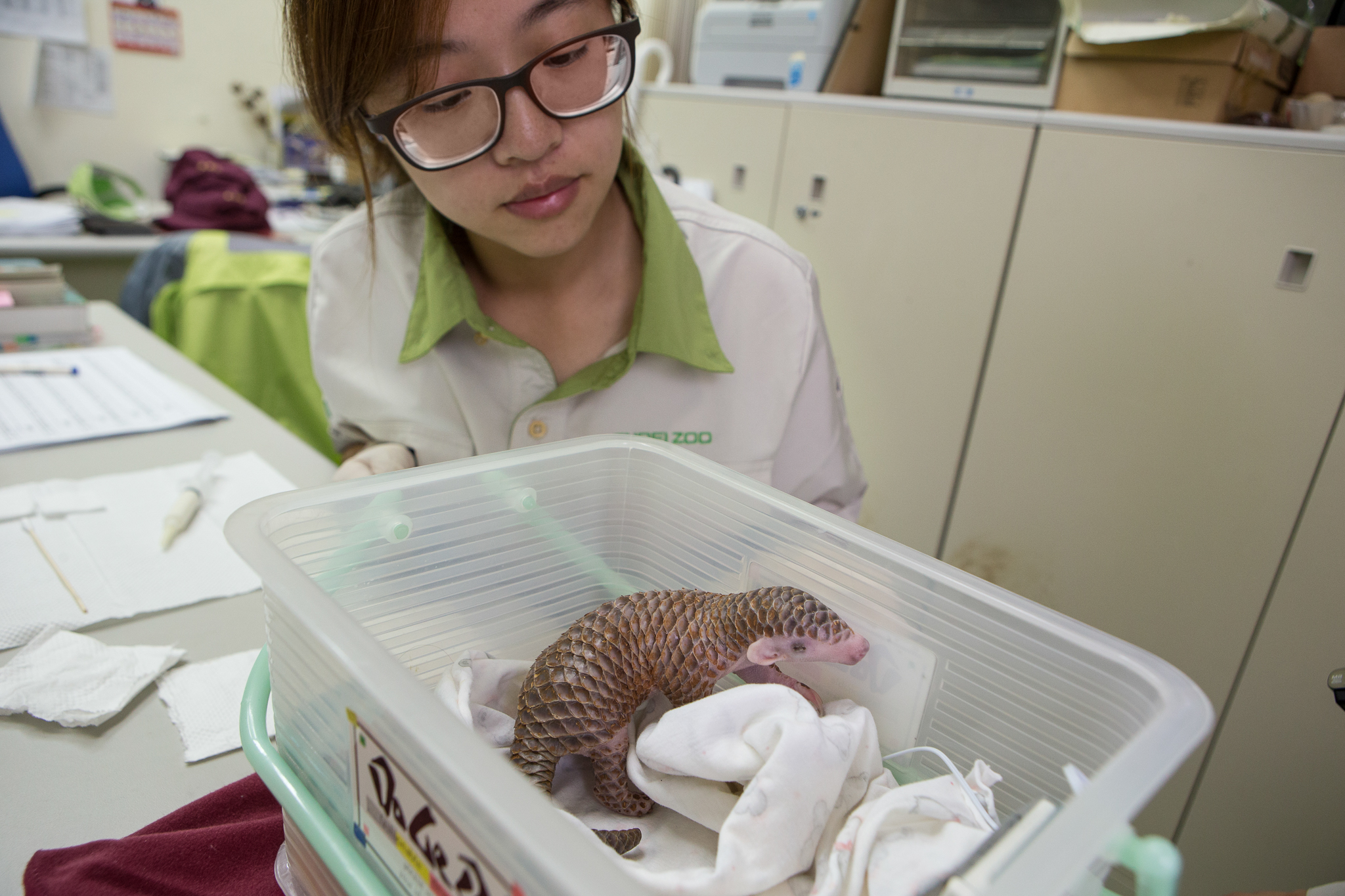 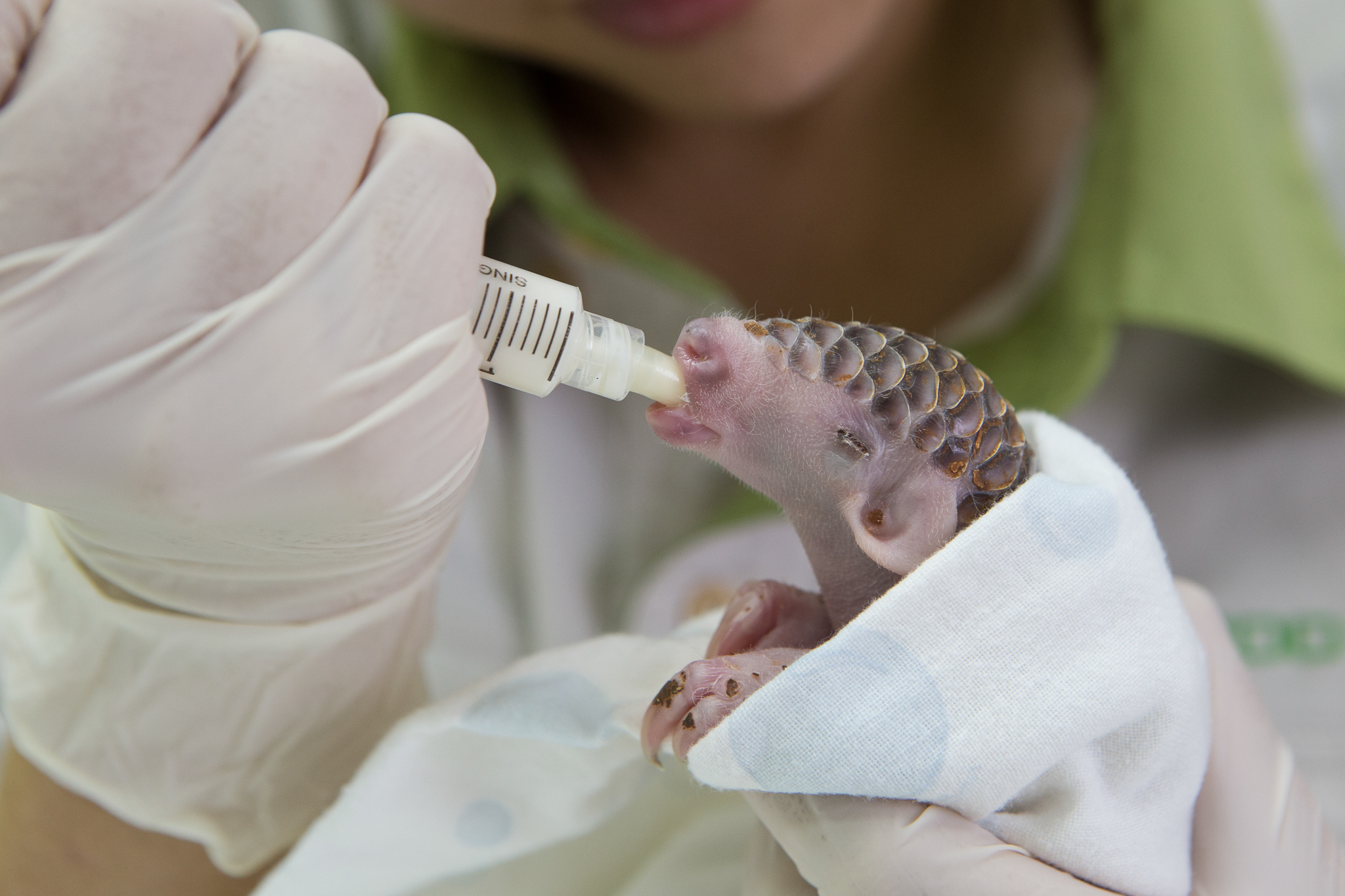 In recent years, conservation organizations large and small have stepped up in the fight to slow the precipitous loss of pangolins from the wild. These efforts range from developing scientific studies to better understand the basic biology and ecology of the animals to rewriting trade policies and enforcement strategies to squeeze, if not completely eliminate, the pangolin market.

One small but critical piece of this fight are the efforts by organizations and individuals to care for pangolins that have been confiscated from poachers—either to release these animals back into suitable habitats once they’re healthy, or to establish captive breeding populations to help supplement the numbers and genetic diversity that have been lost from the wild.

Rehabilitation centers like Nguyen’s Save Vietnam’s Wildlife and captive breeding programs like the one at the Taipei Zoo are prime examples of these types of small-scale but critical efforts. Although the number of animals cared for and reared in these facilities is relatively small compared to the tens of thousands of pangolins poached from the wild each year, the influence these programs have on public perception, both within their communities and around the world, has the potential to extend much further.

According to Nguyen, most people in Vietnam don’t even know that pangolins are illegal to eat, and many local people fear them simply because of their strange appearance. And then there are the people who don’t even know they exist. So, while Nguyen and his staff spend a great deal of their time caring for pangolins like Lucky, they are equally dedicated to educating the public about the world’s only scaly mammal, and doing whatever they can to make sure we don’t lose them for good. 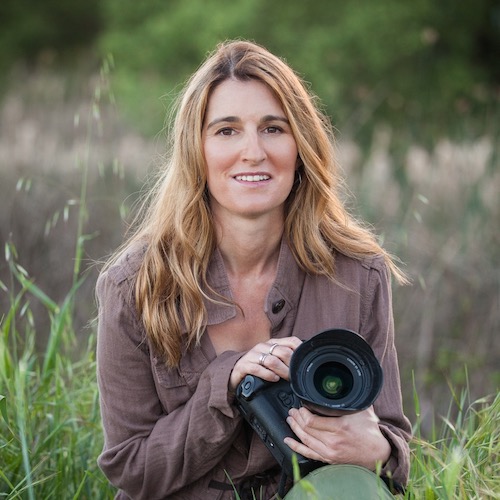 Suzi Eszterhas is an award-winning wildlife photographer who is best known for her images of baby animals in the wild. Her photographs have been published in more than 100 magazine cover and feature stories in publications around the world. She has ten books in print and another four in progress. She is a dedicated conservationist and lends her images and expertise to help raise funds and awareness for several environmental organizations around the world. Her latest book, “Sloths: Life in the Slow Lane” takes readers on an immersive journey through the jungles of South America to discover the secret lives of these strange and elusive creatures. 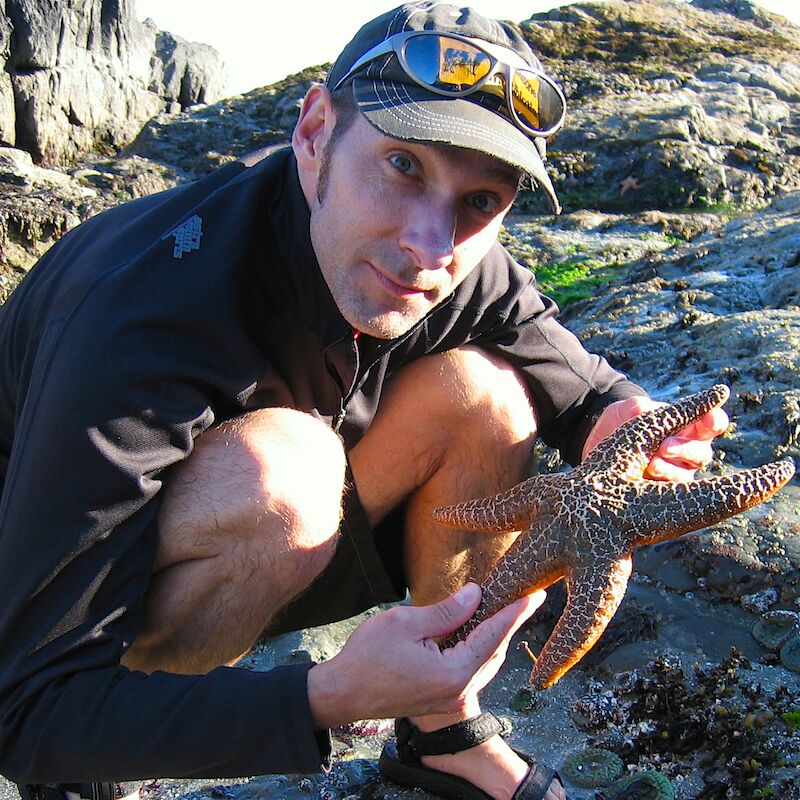 Steven Bedard is the co-founder and editor-in-chief of bioGraphic. Having spent the past 20+ years creating science content, he has written and produced immersive, multi-screen experiences, short- and long-form documentaries, interactive simulations, and hundreds of articles and essays on topics ranging from astrophysics and archaeology to genetics, evolution, and public health. As a former field biologist who spent the early 90s studying spotted owls and northern goshawks, he has found his happiest place covering the natural world for bioGraphic. Follow him on Twitter @steventbedard. 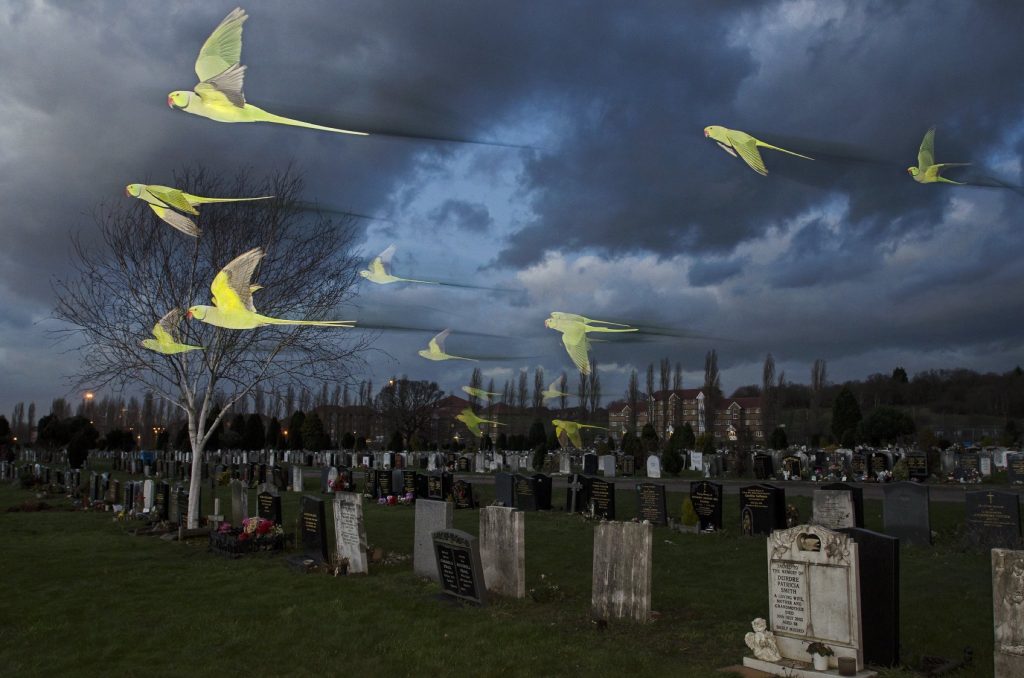 Banquet on Legs 01.25.2019 Spotlight - When an octopus known for its size and hunting prowess encounters a football-field-sized team of spider crabs, the outcome isn’t what you might expect. 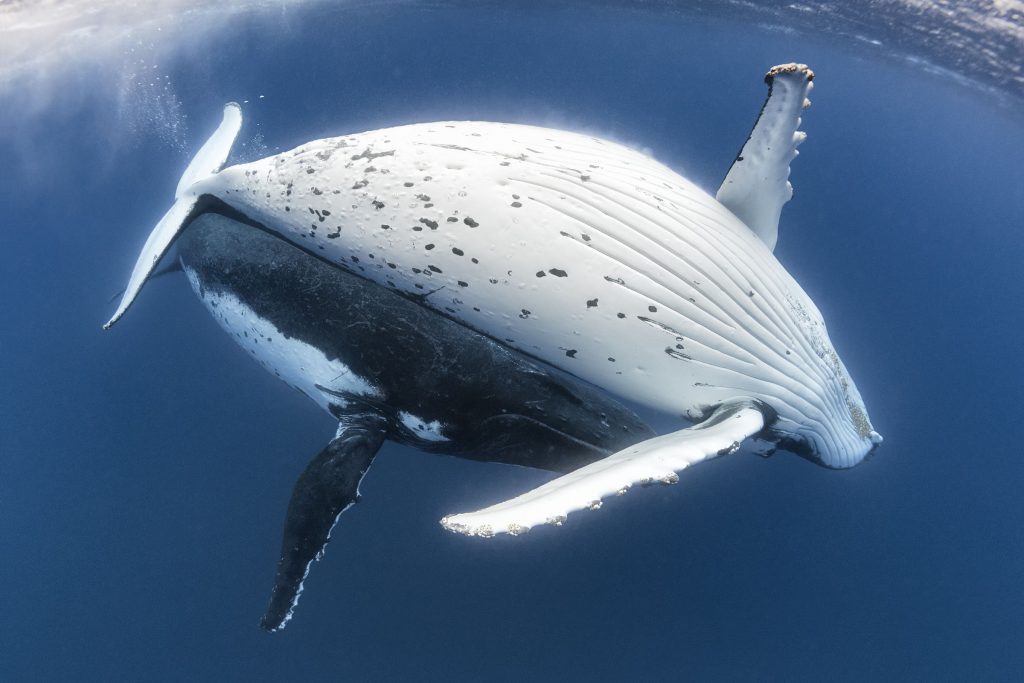 Head over Heels 02.13.2018 Spotlight - To woo a potential mate, a male humpback whale pulls out some surprisingly smooth—and tender—moves.