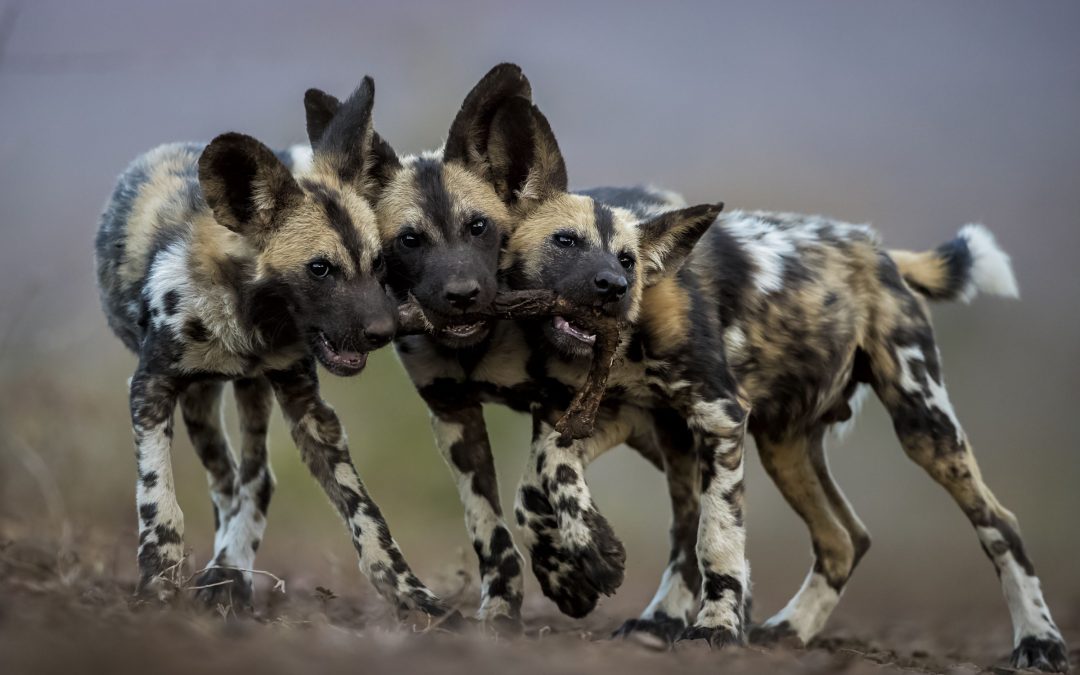 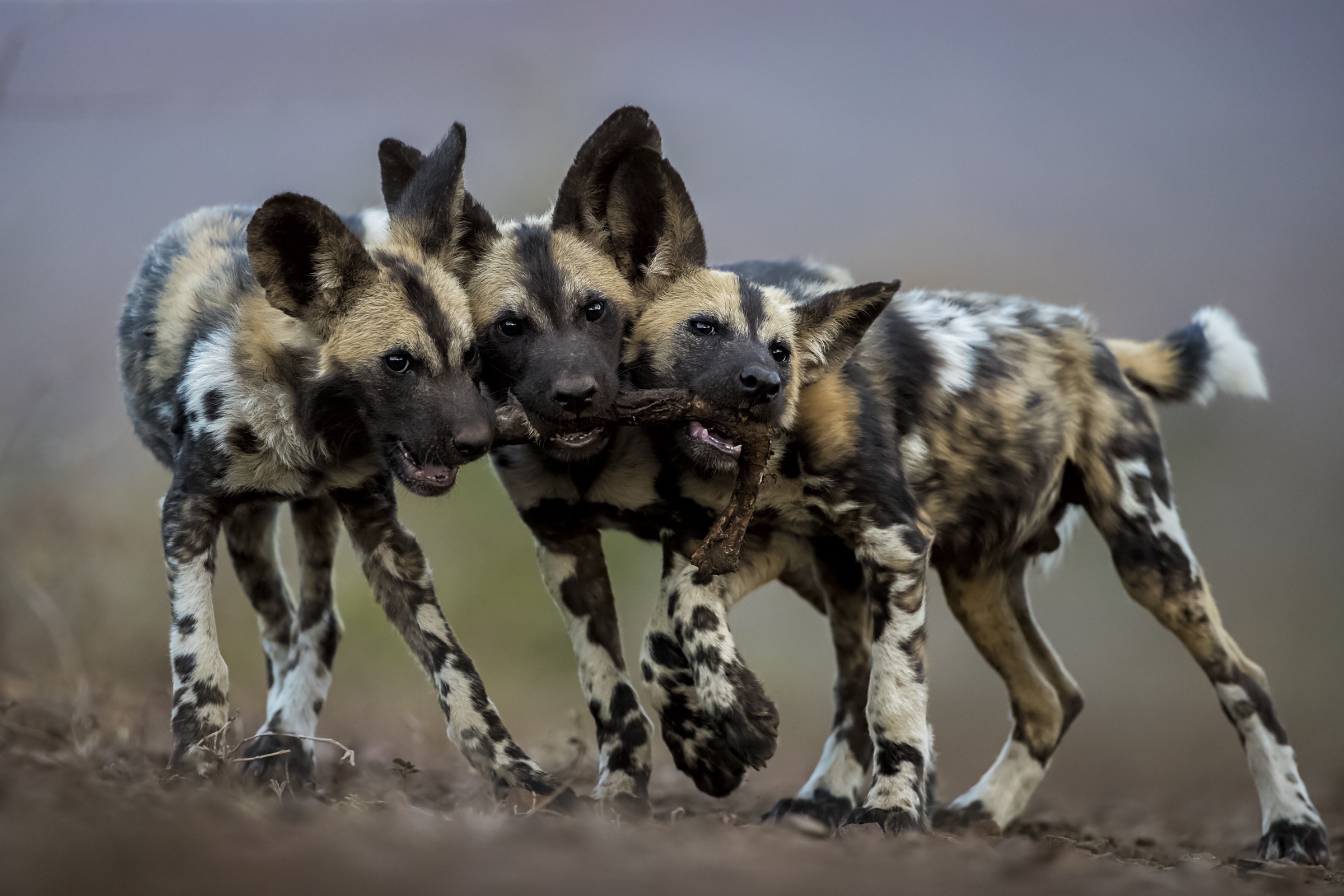 This rambunctious trio of African wild dog pups—seen here using an impala leg as a communal chew toy—looks like more than enough for a mother to handle. And they aren’t the only pups in their litter; three of their siblings alternately doze and play nearby, their bellies full of impala meat. Fortunately for their mother, the pack’s alpha female, she doesn’t have to raise these youngsters alone. All of the other adults in her pack will help to feed the growing pups, regurgitating food from recent kills—and occasionally bringing back morsels like this impala leg—for two to three months until the pups are old enough to leave the den. In fact, during the mother’s last few weeks of pregnancy and her first few weeks spent nursing newborns, when she can’t leave to hunt, other pack members will even regurgitate food for her. Once she begins hunting again, the new mother will also rely on her packmates to help keep the pups safe from other predators. During each of her forays, at least one of the younger adults will stay behind to babysit.

Since the average litter size for African wild dogs (Lycaon pictus) is 10 to 11 pups—and some litters may include as many as 21—there are several obvious reasons why having plenty of helpers increases survival rate. But recent research has revealed additional insights into the benefits of large pack size. Not surprisingly, the dogs are more efficient hunters when they work in larger groups: They’re better able to launch coordinated attacks, distract a mother from her calf, run shortcut routes to intercept fleeing prey, and subdue larger animals. The biggest advantages, however, come after a kill is made. Because of their relatively small stature, wild dogs regularly lose their prey to scavenging lions and hyenas, sometimes before they’ve had a chance to take a single bite. Eating quickly is therefore of the utmost importance. Larger packs can make much faster work of pulling apart a prey animal, giving the dogs a better chance of eating their fill before being chased off. Larger groups are also better able to defend a kill, at least for a few minutes—all the time it takes for a wild dog to consume three days’ worth of meat. Scientists have found that these advantages begin to disappear as group size dwindles, and that a pack typically needs at least five adults to successfully raise pups and ensure its longevity.

Such findings have important implications for efforts aimed at ensuring the survival of this rapidly declining species. Habitat loss, snares set to capture bush meat, diseases spread by domesticated dogs, road-kill incidents, and decades of persecution have all taken a toll on wild dog populations. The species, which is listed as Endangered by the International Union for Conservation of Nature (IUCN), has disappeared from much of its former range, and scientists estimate that there are now only about 660 packs remaining in Africa. As conservation organizations work to both protect existing packs and reintroduce wild dogs into areas where they once roamed, maintaining sufficient pack sizes—and relocating animals in large enough groups—will be of critical importance. Fortunately, in many cases, wild dogs have proven to be remarkably receptive to new pack members, allowing conservationists to bolster smaller packs with relocated animals from other areas. In South Africa’s uMkhuze Game Reserve, where photographer Bence Máté captured this image, Wildlife ACT did just that in July of 2017, introducing three males from another reserve to two young females who were ready to start a new pack. After three weeks of bonding time in a special enclosure, the dogs were released into the park, where they have now successfully raised their own pups. 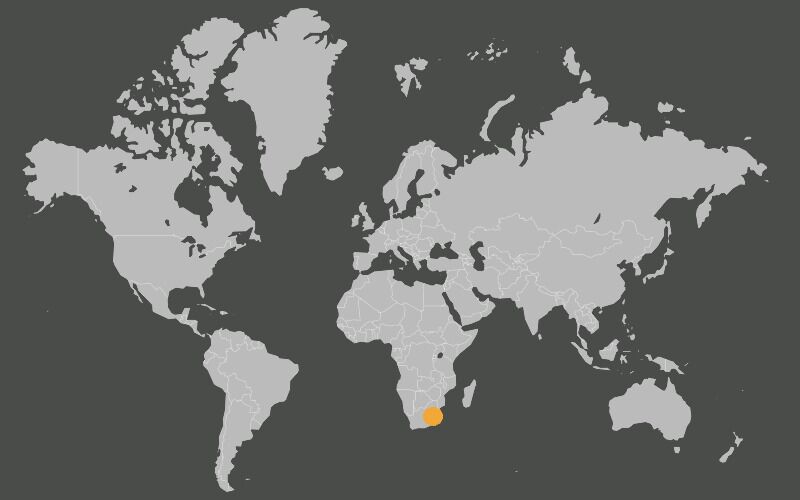 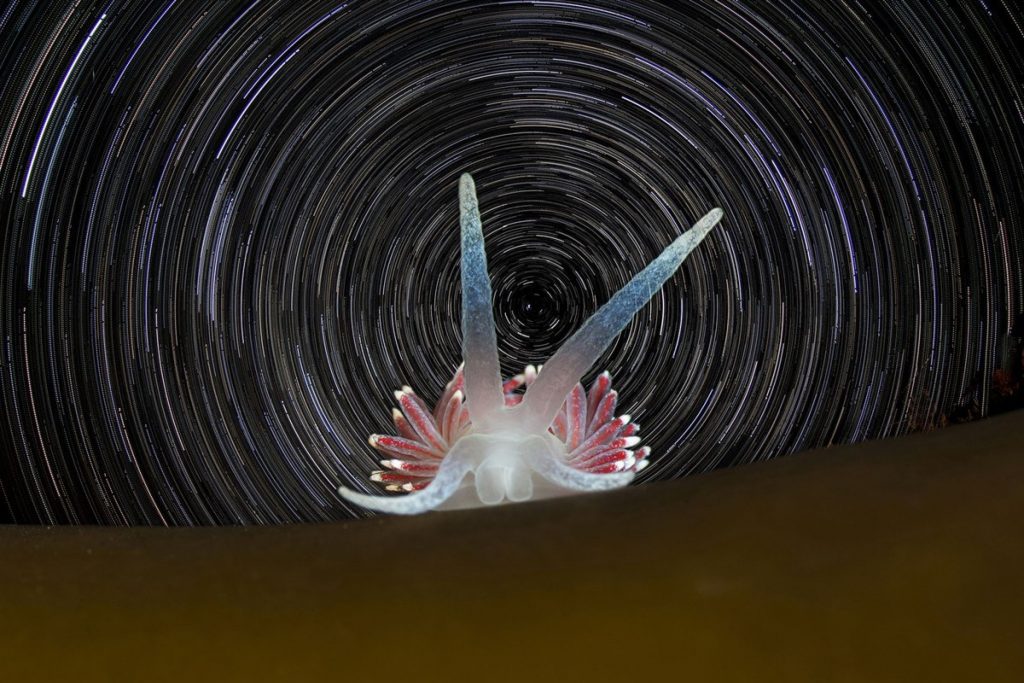 Star Attraction 01.24.2017 Spotlight - Even a night sky of pirouetting stars can’t upstage the otherworldly beauty of a red-gilled nudibranch.