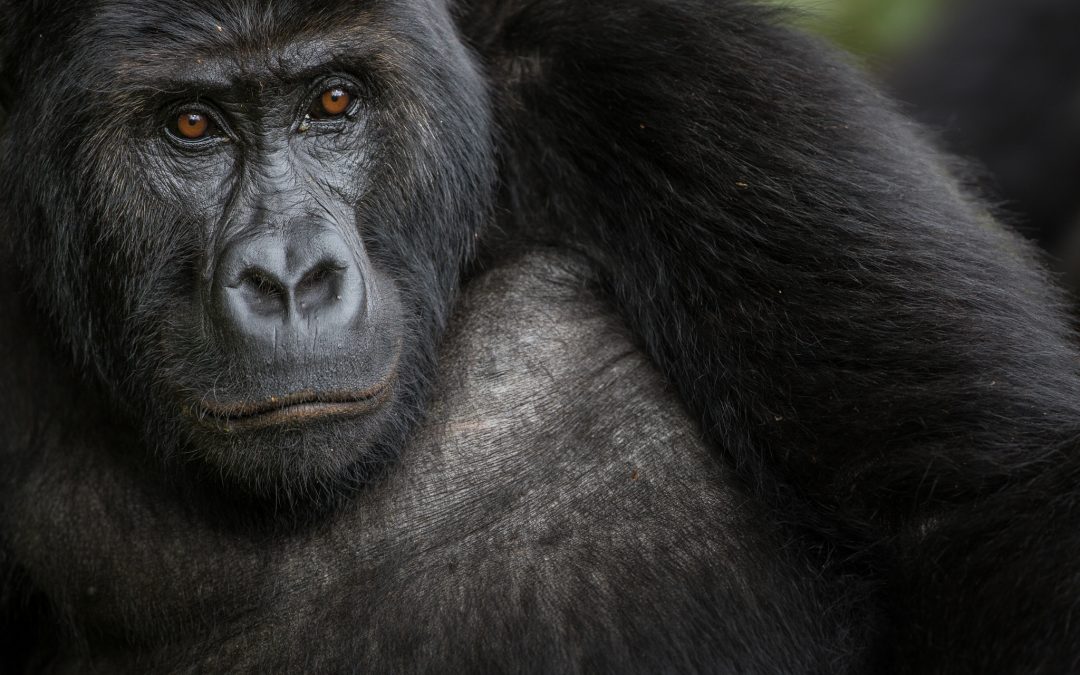 To bring medical support to mountain gorillas, a group of veterinarians brave one of the world's most dangerous national parks.

Story and Photographs by Marcus Westberg 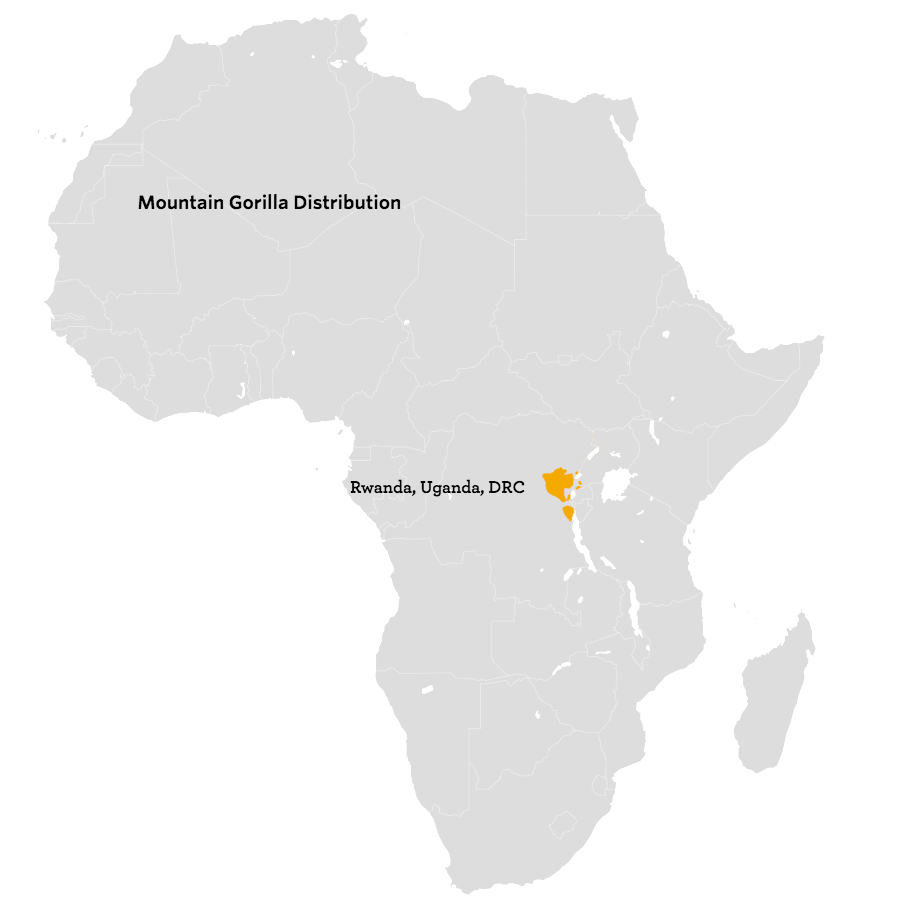 The dart lands just below her left shoulder. Gashangi, a 33-year-old mountain gorilla, reacts as though stung by a bee. She swipes a large hand towards her perceived antagonist but is unable to reach the feathered projectile. A few moments later she gets up and begins to move off through the lush montane vegetation towards the rest of her family. The bright red dart falls off when she attempts to squeeze her heavy body through the thick patch of Galium and Urera vines where she had been feeding. Veterinarian Eddy Kabale picks it up from the ground and nods towards his colleagues. The medicine has been injected; there is nothing more they can do. He collects his gear and readies himself to set off through Virunga’s nearly impenetrable jungle once again. It is already mid-afternoon, high time to return to the park’s well-protected headquarters.

Straddling Rwanda, Uganda and the Democratic Republic of Congo (DRC), the misty Virunga mountains are home to just over half of the world’s 900 mountain gorillas. Together with Uganda’s Bwindi Impenetrable Forest National Park, they make up the species’ last remaining refuge. But Virunga National Park, Africa’s oldest and once its most biodiverse, plays host to regular human conflict and was occupied by the rebel group M23 as recently as 2012. One hundred and forty park rangers have lost their lives in the battle for the park and its nonhuman inhabitants since 1994, and numerous gorillas have fallen victim to bullets, machetes and snares. Park director Emmanuel de Merode was nearly killed in an ambush scant days before the Gashangi intervention, taking four bullets in the stomach and legs.

Rangers and trackers prepare to receive their instructions at the Kahuzi-Biega National Park headquarters, Democratic Republic of Congo (DRC), before setting out in search of Grauer’s gorillas.

Eddy Kabale of Gorilla Doctors takes notes during a visit to the family of dominant silverback Chimanuka. With over thirty members, this is one of the biggest gorilla groups currently under observation in eastern DRC.

While the courage and dedication of Virunga’s rangers has played a major role in the astonishing recovery of the mountain gorilla population, there is another group whose tireless efforts are equally important. Gorilla Doctors is a non-profit made up of a dozen or so local veterinarians in DRC, Rwanda, and Uganda, as well as a number of international experts and the occasional volunteer. Their mandate is to monitor the populations of mountain and Grauer’s gorillas–the two subspecies that live in the Congo Basin–and, when the life or well-being of an individual gorilla or family group is at stake, intervene. The ailments that require interventions are often caused by humans—injuries from snares and, with increasing frequency, respiratory diseases contracted directly from people visiting the gorillas or living in their vicinity, or from their livestock—but injuries from falls and fights are treated as well. As there are so few mountain gorillas left, each individual’s life is considered essential for the species’ survival.

Kabale had arrived at the Virunga National Park headquarters in Rumangabo two days earlier. Meeting him there were the organization’s regional director, a German volunteer, and Alisa Kubala, a veterinarian and PhD student who is conducting a study of cross-species disease transmission. Gorillas and humans share 98.5% of their genetic makeup, leaving them susceptible to many of the same infections. Yet gorillas, long confined to small, isolated habitats, have had no opportunity to build up immunity against disease such as influenza. Twenty percent of sudden gorilla deaths are believed to be caused by infectious respiratory disease, second only to trauma; many of these likely originate with human pathogens. Kubala is particularly interested in whether mountain and Grauer’s gorillas are susceptible to contracting malaria, since climate change is bringing mosquitoes to the previously mosquito-free elevations where they spend their lives.

The reason for this visit was not malaria research, however, but the annual health examinations of four orphan mountain gorillas who live at the Senkwekwe Sanctuary at park headquarters: Ndeze, Ndakasi, Maisha, and Matabishi. The team of veterinarians was also here to see a newly arrived Grauer’s gorilla, Kalonge, who had just finished her quarantine period and needed to be thoroughly examined for the first time. The sanctuary cares for mountain gorillas orphaned through poaching or the illegal wildlife trade and is the only one of its kind in the world. New arrivals always go through a quarantine period and an extensive health examination before being allowed any contact with the other gorillas. Kalonge had been caught in a snare and found by a group of young boys; they brought her to their chief, who contacted the authorities.

Sedating the older gorillas for their examinations turned out to be more difficult than one might expect. The animals are intelligent and experienced enough to know that they won’t be darted in the head or while standing up—knowledge they exploited without hesitation and sometimes with humorous defiance, lazily swinging back and forth on the room’s rope swing before laying down on the ground, shuffling around to keep their heads facing the veterinarians. It took almost half an hour to get a clean shot at Maisha, a 9-year-old female and the little group’s matriarch, but once that was done—with a dart containing ketamine and xylazine—the work proceeded without further complications. The four doctors, working on the floor around the still gorilla, quickly concluded that all was well and that Maisha appeared to be in good health.

Next up was little Kalonge. When Philippe Bitege, one of the gorillas’ full-time caretakers at Senkwekwe, carried her in, she was already sedated. Kabale estimated that she was about two years old, and unlike the four mountain gorillas she was small enough to be examined on a table. The caretakers and veterinarians were fairly certain that she was a Grauer’s gorilla, but before she could be moved from Senkwekwe to GRACE—a sanctuary dedicated to that subspecies of gorilla—samples would have to be sent abroad for DNA analysis. Kalonge’s examination was more thorough than Maisha’s since it was the first one since her quarantine ended, but she too was found to be in good health. When she began to awaken she immediately reached for the safety of Philippe’s arms.

Although their numbers seem to be increasing, mountain gorillas are still under severe threat. Perhaps 900 individuals exist, in two isolated sub-populations—one in the Virungas and one in Bwindi Impenetrable Forest National Park, Uganda.

Ndakasi, unfortunately, was not doing so well. Her tuberculosis test was positive, and her mouth, tongue and throat were covered with lesions. Her breathing appeared to cease several times during the examination; Kubala was tasked with keeping an eye on Ndakasi’s chest and warning the others if her breathing became too irregular. Despite these concerns, the examination was quick and efficient. Kabale, who is to remain in Rumangabo when the rest of the team returns to Rwanda, would continue to monitor Ndakasi carefully for another week and then again on his next monthly visit to the sanctuary.

Before the veterinarians were able to begin the next examination on the following morning, there was another job to do. One of the gorillas inside the park had been ill for some time. A tumor was making it difficult for her to swallow, and her lips were torn. She needed urgent medical attention. After a quick meal of rice and beans, the team set off towards Bukima, where the gorilla’s family was last seen. 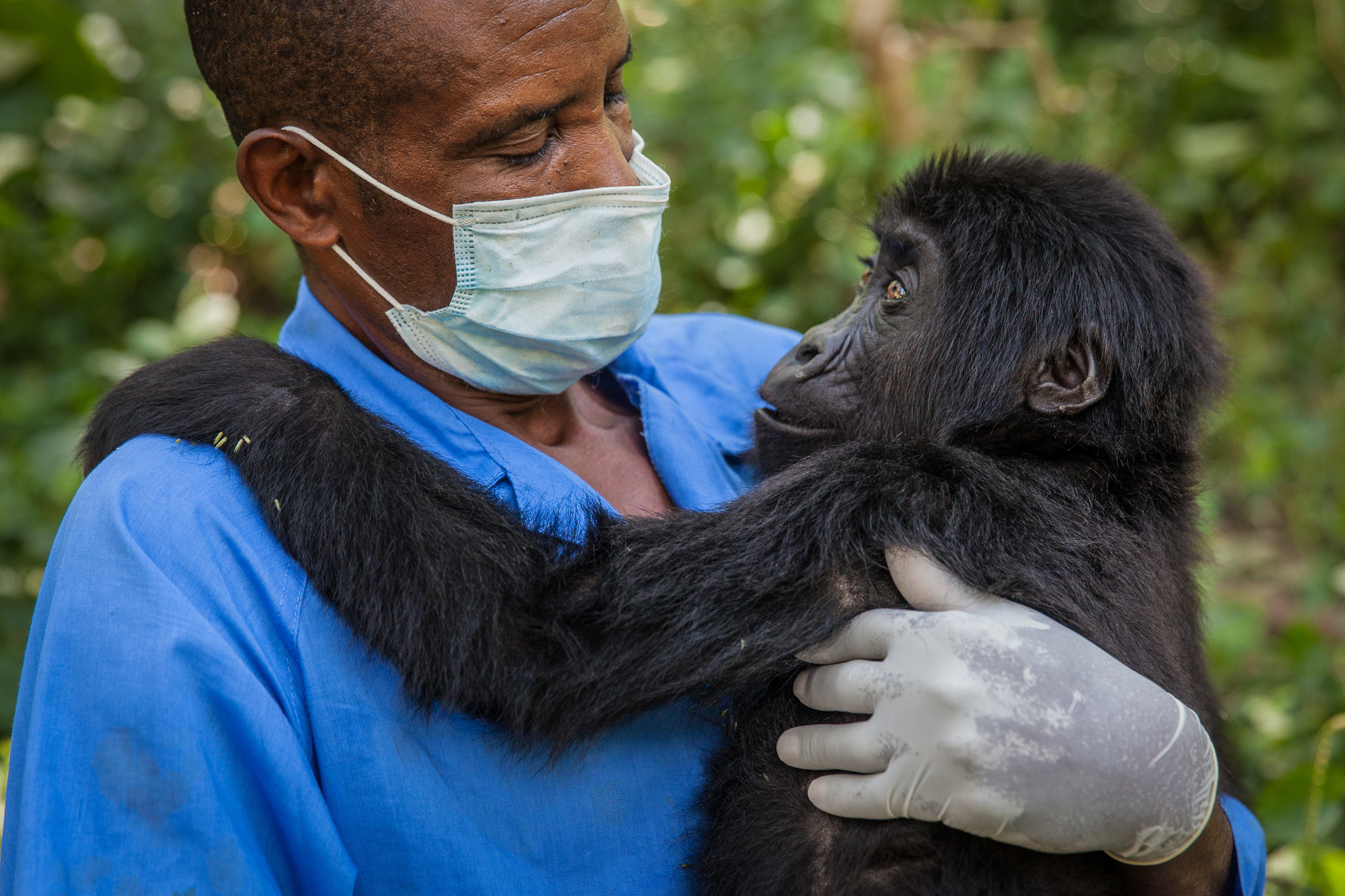 Bukima is the starting point for all gorilla tracking in Virunga National Park. Here the gorillas live side by side with farmers, and to reach the barbed wire separating the forest from the fields the team first had to pass through a scattered local settlement. One of the rangers accompanying the veterinarians enlarged the gap between the bottom wire and the ground enough for the others to crawl through. They continued in silence, walking in single file, and after an hour made contact with two trackers. These men had been in the forest since the early morning to locate Gashangi, the sick gorilla. Kabale sat down on the damp ground and began his preparations, checking the dart gun that he would use to inject the medicine. A whispered conversation with the trackers followed. What they were doing was not entirely without risk. The idea was to find Gashangi and separate her from the rest of the family, particularly the silverback. Gorillas are rarely aggressive, but a dominant male will protect his family. If he charged, treating Gashangi would become difficult. 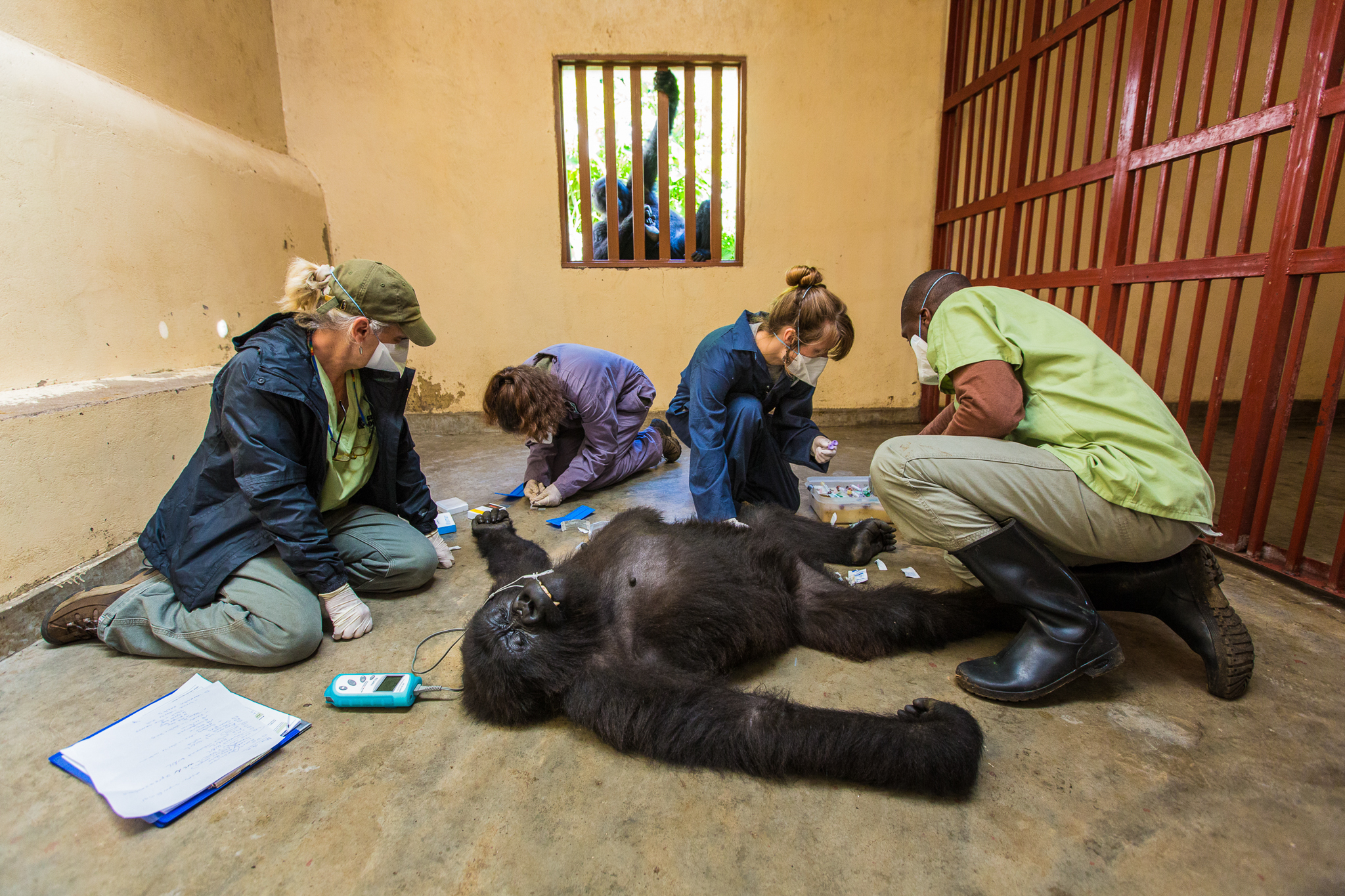 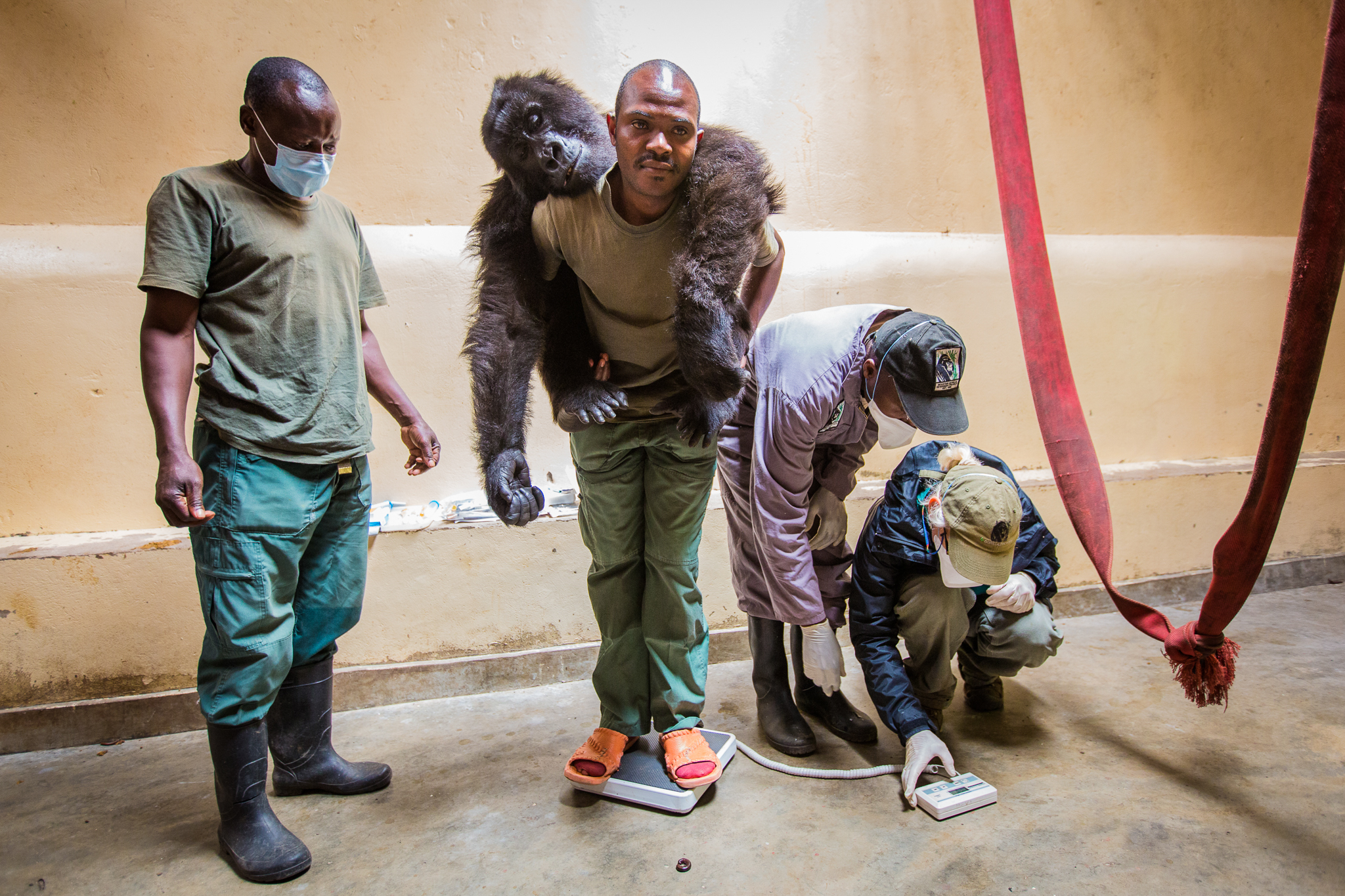 But the family patriarch was busy enjoying his afternoon meal, and the patient was soon found, already isolated from the other family members. Her movement through the thick vegetation made it difficult for Kabale to get a clean shot, and it was almost half an hour before he dared to pull the trigger. A missed shot does not mean merely wasted medicine—it might very well mean a wasted day. A few years earlier, an intervention in Uganda ended up taking a full four days and more than 30 hours of trekking through rough terrain, so it is better to avoid taking unnecessary risks.

Alas, the intervention wouldn’t save Gashangi’s life—but there was never much hope of that. She suffered from a malignant skin cancer, and there was nothing Kabale or anyone else could have done to prevent her death. But a number of the trackers suspected her to be pregnant, so Gorilla Doctors was hoping that an experimental treatment—an expensive vaccine that had proven successful in mice, dogs and humans—would reduce pain and delay death long enough for her baby to be born. As it turned out, she wasn’t pregnant, and Gashangi died two days after the last of four vaccinations. But the intervention shows just how far Kabale and his fellow veterinarians are willing to go for even the remotest chance of saving a life.

As humans encroach on gorilla habitat for farmland, oil and charcoal, and as increasing temperatures and rainfall invite more pathogens, Gorilla Doctors’ work becomes ever more important. Facing challenges like gruelling treks through inhospitable territory and armed rebels, poachers and outlaws, these veterinarians and rangers routinely risk their lives for our wild relatives. The future of the eastern gorillas is anything but secure, but it would doubtlessly be far bleaker if it were not for Gorilla Doctors. 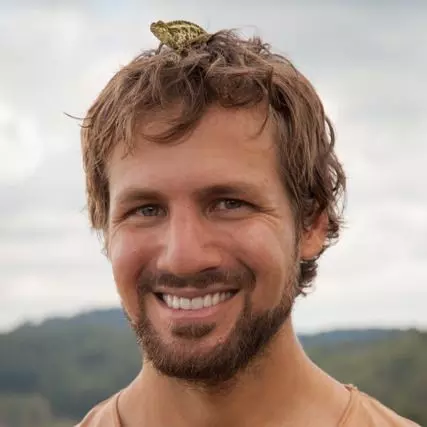 Marcus Westberg is an acclaimed photographer and writer, focusing primarily on conservation and development issues in Sub-Saharan Africa. A two-time Wildlife Photographer of the Year finalist, Marcus is a member of Wildlife Photographers United who works closely with a number of non-profit organizations and projects across the continent, and whose emotive images have been showcased in dozens of publications around the world. 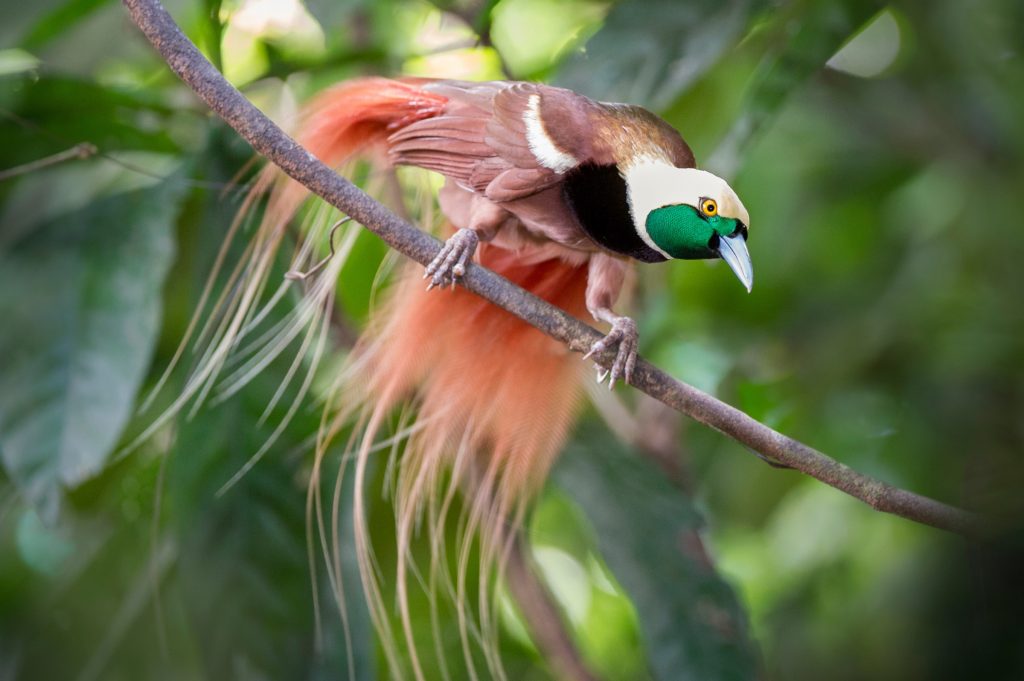 Where the Rainforest Meets the Road 01.08.2019 Article - Community-led conservation has taken root in a remote corner of Papua New Guinea. Now the plan’s architects must ensure that ecological protection and economic prosperity can coexist. 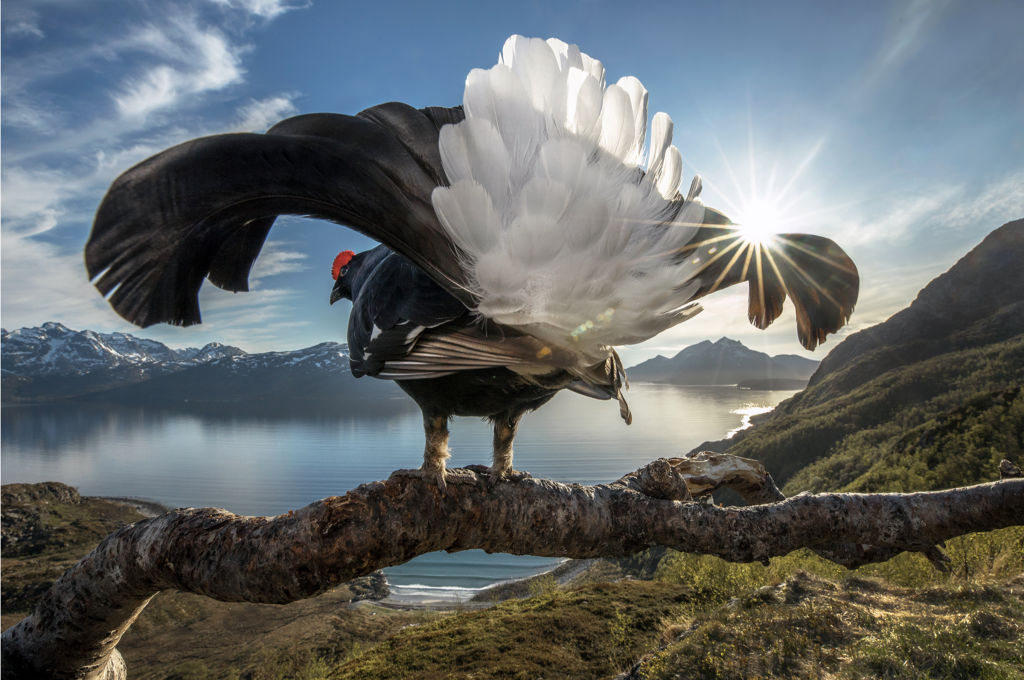 The Big Picture 2019 04.30.2019 Photo Gallery - From the beautiful to the bizarre, this photographic showcase of life on Earth shines a light on some of our planet's most amazing species and places.