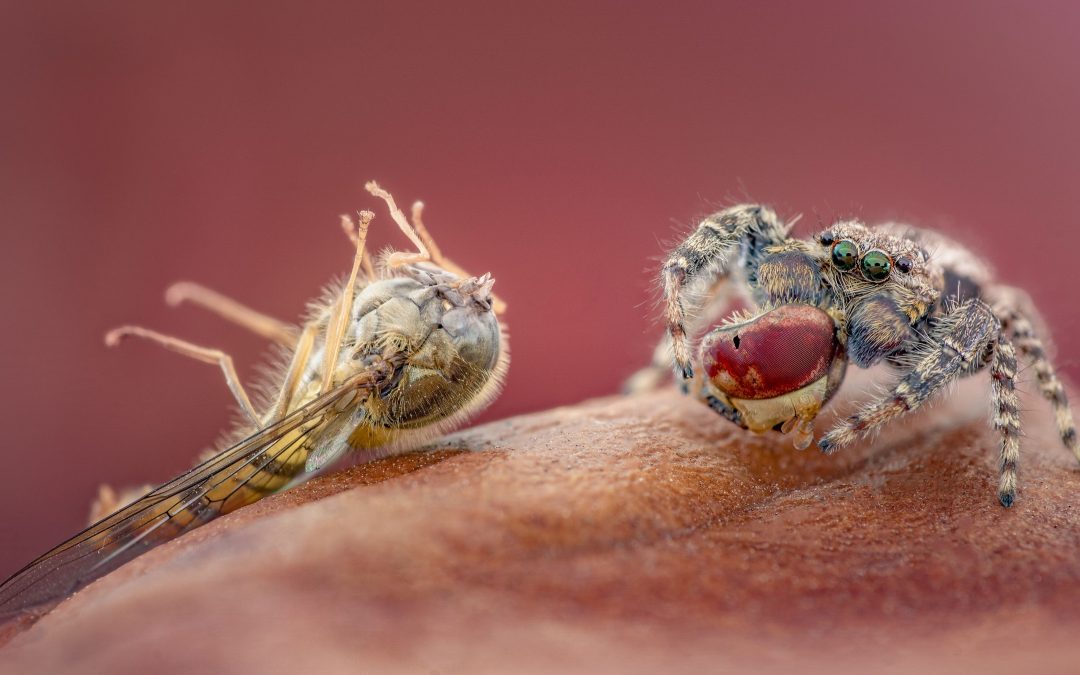 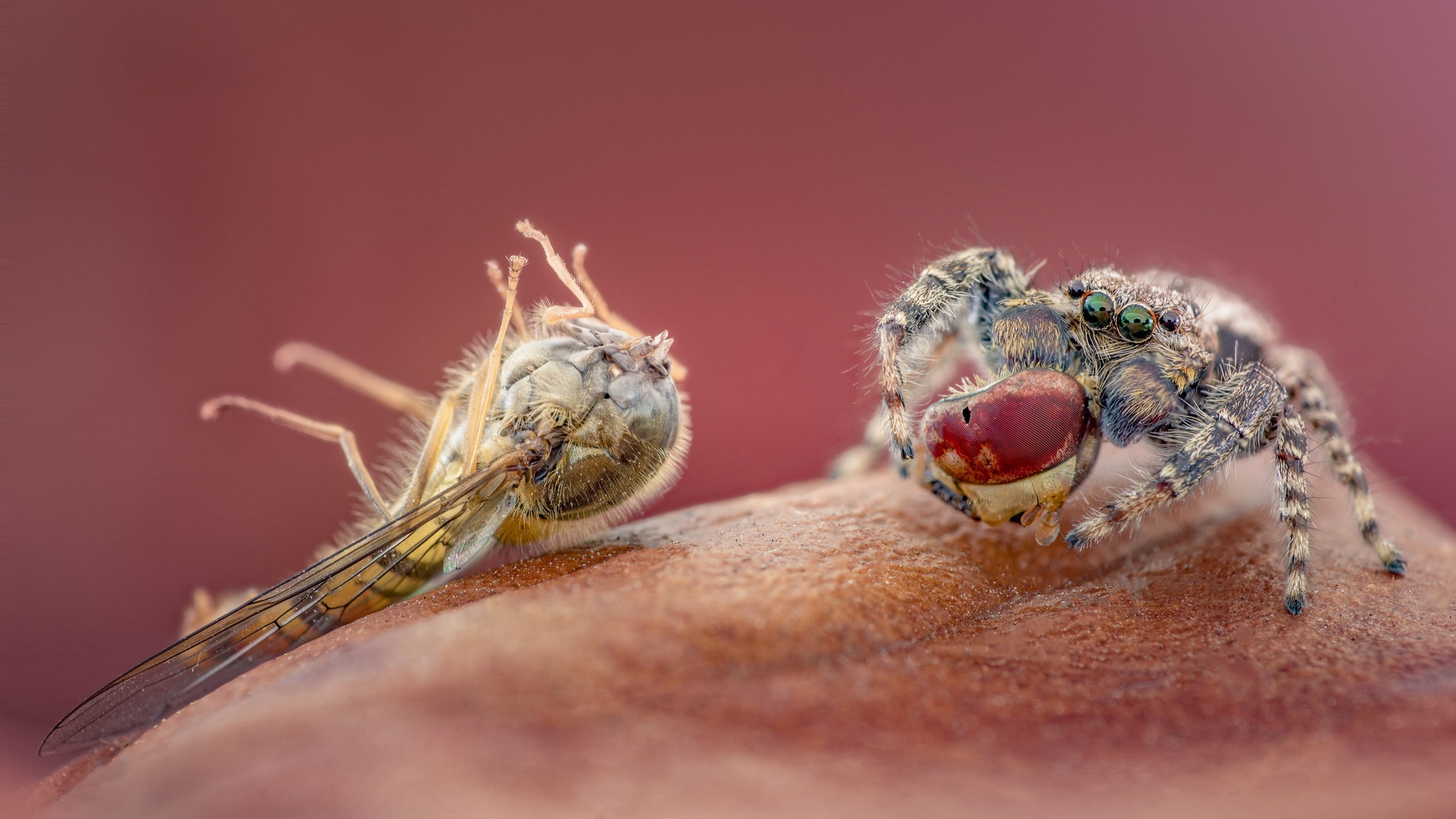 The soft colors in this pastoral scene, taken in the Pulborough Brooks Nature Reserve in southern England, belie the tiny life-or-death battle that has just ensued. Photographer Kutub Uddin witnessed the deadly attack when an aptly named fence post jumping spider (Marpissa muscosa) leaped from its vantage point on a fence onto the dry leaves below in pursuit of a marmalade hoverfly (Episyrphus balteatus).

The fence post jumping spider, like most spiders, has eight eyes. The large, central pair are responsible for acute vision, while the three smaller pairs provide depth perception and motion detection. Together, the eyes offer the hunting spider almost 360 degrees of vision.

Once the spider has used its keen eyesight to home in on its prey, it calls on its next secret weapon: hydraulic legs. Researchers at Cambridge University in the 1950s determined that members of this family of spiders can quickly fill their fourth pair of legs with fluid, allowing them to spring toward a target with incredible speed and precision. (And just in case a spider misses its target, it trails a line of silk from its launchpad so it can climb back up to wait for another shot.)

In addition to being endowed with impressive legs and eyes, jumping spiders are also well known for their cognitive abilities. Scientists have documented the tiny invertebrates’ ability to learn and change their behavior in a number of different contexts, including in their approach to hunting. Even if a jumping spider’s first attack on a particular prey species is unsuccessful, the tiny predator is able to learn from its mistakes and launch a smarter second attempt.

In this case, the tussle between the spider and its victim lasted more than 40 minutes before the hoverfly finally succumbed. The spider then spent half an hour beheading its prize, which—at least while Uddin was watching—was the only part of the prey it actually consumed. After devouring the hoverfly’s calorie-rich head, the expert hunter simply climbed back up the fence post to wait for its next victim. 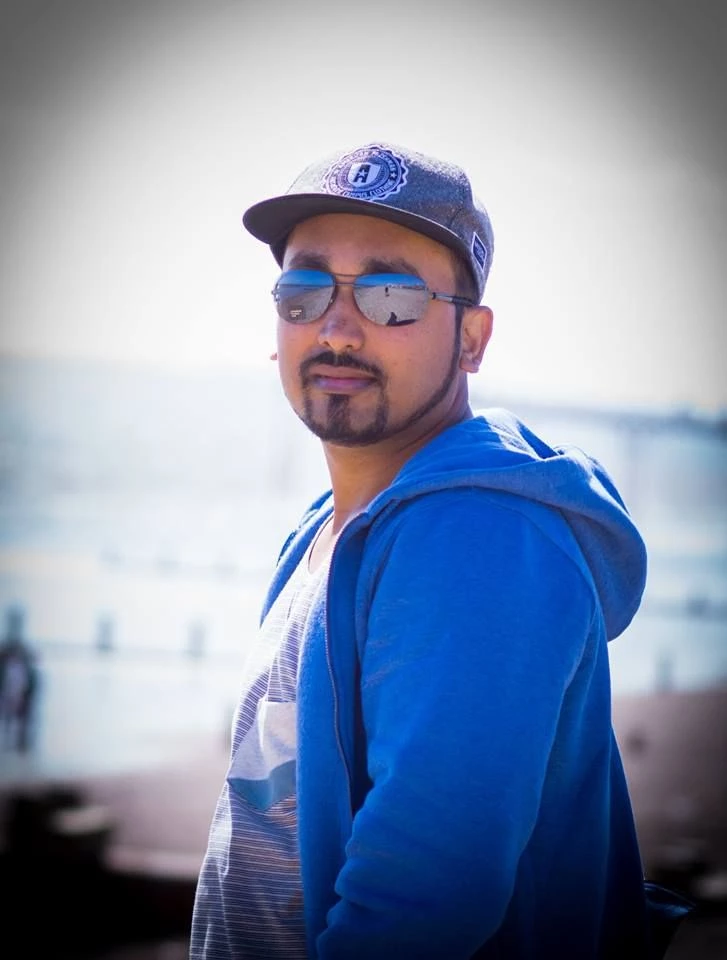 Born and raised in rural Bangladesh, Kutub Uddin moved to the UK at the age of 25. After receiving his first camera as a gift, he started taking pictures of animals and landscapes. He has since developed his interest, with an emphasis on macro photography, by studying different techniques through online courses and books. Uddin’s work has been featured in numerous national newspapers, magazines, and television news.

Lens of Time: Jaw Jumpers 07.30.2019 Video - Sometimes the best solution to a sticky situation is a quick escape, and few escapes are faster than a trap-jaw ant’s.